History of the Capri

History: The car you always promised yourself

The Ford Capri really started life in 1965.  After the successful launch of the Mustang in the US, Ford decided that there must be a market for a similar sports coupe in Europe as well.  As a result, Ford commissioned Project Colt to develop a European version of the Mustang. 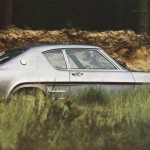 By late 1967 Ford had agreed the basic body shape. However, because Mitsubishi had already registered the name “Colt” for their own vehicle, Ford had to change the name.  They settled on Capri, following the Consul Capri of the early sixties.

Protoypes of the new Capri were built by a team of British engineers and then tested, in Boreham, Essex. Feedback was all very positive, except that a lot of the reviews suggested that the back seats were very claustrophobic. As a result, the original square rear quarter windows were replaced by the now familiar round quarter windows.

The Capri was launched at the Brussels Car Show on the 24 January 1969. Production was actually started at the Halewood plant in November 1968, which meant that all Ford dealers in the UK had at least one Ford Capri in their showrooms by the 5 February 1969.

Over the next eighteen years, almost two millions Capris were produced.

Many years ago, as a teenager, I owned a number of Capris, all mark ones. The first was a light blue 1969 1300XL that was purchased to replace an old four door mark II Cortina. This little 1300 Capri was pretty rusty, with a lot of filler and chicken wire in the wings.  It also had a broken piston ring meaning that plug number one had to be cleaned every couple of hundred miles. But needless to say, it was still a lot of fun to drive. 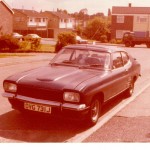 The second Capri was a 1600GTXLR that was swapped for an old Triumph 2000 estate. It was lightly customised (but really not very well) by myself, and sported a fibre-glass bonnet, spoiler and boot lid, and a louver on the the rear window. And if you look closely, you’ll see the furry dice in the windscreen too! It was also resprayed in my mother-in-laws garage. The finish really was pretty poor and it ended up with the finish of a blue coloured orange. 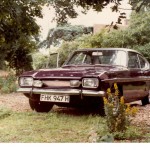 A couple of years later we purchased an aubergine 1600GTXLR. This was really nice and we kept this until wedding bells beckoned and a more practical vehicle seemed more appropriate (a bright red Mini Clubman!).